Chromebooks are new types of cheap laptops that run on Linux-based ChromeOS, which is designed to use an internet connection. They’re very different from laptops with their own operating system altogether, just like Android phones. Chrome serves its basic functions pretty well, and it’s essentially mobile considering it’s an online-only machine that does most of its work in the cloud. It’s an average laptop without any extra features.

They are extremely light like ultrabooks that essentially don’t require heavy processing power or lots of RAM (storage space). They use cloud services and Google Apps instead of relying on local servers. A Chromebook is an inexpensive laptop that runs on Google’s Chrome operating system instead of Microsoft Windows.

Chromebooks are extremely useful for students in education because of their streamlined design and ease of usability(for seniors). Chromebooks are not as good as your feature-rich laptops. However, they’re worth every single penny. The Chrome OS has a search button just like the one found on the Windows desktop. It’s extremely lightweight compared to both Windows and Mac OS. It has got everything including music, photos, maps, and office.

It gives you the most useful features from Google, google drive, Maps, Gmail, and Docs that are securely stored in the cloud. It syncs with any Android device; all you have to do is log in with your Gmail account and get started with no additional setup required. And the best part is that the Chromebooks are updated by themselves so you don’t have to worry about manual updates and downloading.

A laptop is a portable personal computer that has a smaller form factor. It has all the capabilities of a full-size desktop computer but is compact enough for easy-to-use mobility. A miniature version of a computer that runs on batteries and has an on-screen keyboard, a trackpad, and a mouse, which is technically a trackball. Unlike Chromebooks, laptop computers run on Windows OS and Mac OS and powerful Intel core processors.

It’s equipped with most of the functionalities of a PC, meaning it basically runs most of the same software and applications as a PC. However, laptops tend to be more expensive than personal computers. They are designed to use less energy and usually run on AC power (such as from an outlet) or batteries (such as lithium-ion, nickel-metal hydride, etc.). They come with heavy processor power and lots of memory to handle almost any task effortlessly.

Review Best graphics card for gaming and daily use.

The main differences between Android and iOS are obvious: the operating systems. Computers usually run on Microsoft Windows, or Mac OS, which is a full-fledged operating system designed for all sorts of things. On the other hand, Chromebooks run on Google’s Chrome operating system, which is basically the “stripped” version of its Chrome web browser.

Chrome OS is basically the Chrome web browser with some additional features and it relies on Google’s own services such as Gmail and Maps. Any laptop with a Google Chrome operating system is a Chromebook. It doesn’t require a lot of processing power or a lot of RAM like laptops to function well.

It’s cloud-based, which means applications and programs are stored online.

Chromebooks are designed mainly for online use, so their specs don’t matter as much as they do to traditional Windows laptops. Because everything is stored in the cloud and files are stored in Google Drive, they don’t require hard disks. Instead, it augmentation with SD cards or USB sticks if necessary. Laptops have hard disks or solid-state drives (SSDs) for storage.

Unlike traditional laptops, Chromebook computers aren’t natively compatible with macOS or Windows. While there is a method to run Windows software like Office through the Android Store Online, that’s not really the purpose of a Chromebook. And that’s kind of the whole point; Chromebook computers are designed to be connected online and rely on Google’s online services. If you should ever need it, Google Workspaces has you covered with its Office tools like Google Docs, Google Sheets, and others.

The difference between laptops versus Chromebooks may be the most significant for professional photographers and videographers. You can download some apps from the Android Store and save your work in Google’s cloud storage. Chromebooks don’t have enough local storage and processing power for most people to use as their primary computers. On the other hand, there are some good online design platforms like Photopeap or Canva that will run on a Chromebook, so you might be satisfied with the performance.

Chromebooks are generally cheaper than traditional laptops because they lack some of the hardware. A decent Chromebook can be bought for less than $200; a good laptop may cost you at least $300. If you’re using Chrome OS for its intended purpose, i.e., simple, easy, cloud-based computing, that’s pretty darn good value. They’re also lighter than most other laptops and therefore easier to carry around. You can use it for pretty much anything.

Chromebooks are fast and easy to use, but they’re not cheap unless you have a good internet connec­tion. Laptops have greater storage capacity, processing power, and compatibility, but they can be expensive or too much for just a web browser.

There are lots of different types of Chromebooks available, from super-cheap ones to top-of-the-range Google-made ones. But, the same goes for Windows regular laptops. The only brand with excellent screen quality across its entire line of laptops is Apple. And you pay a high price for those displays.

Chromebooks typically last for at least 10 hours on a charge. You’d normally have to pay Mac prices for such longevity. Laptops can last anywhere from 5 hours to over 12 hours, depending on what features you choose. It all comes down to the low-impact Google Chrome operating system, plus there’s no battery-hogging internal hard drive on a Chromebook.

Chromebook vs laptop | How to decide which computer fits your needs? 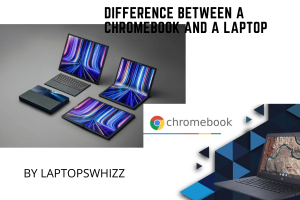 Do you need a laptop with better performance? We’ll help you get there.

Acer’s updated Chromebook 713 is the first with Thunderbolt4 support and is Intel EVO certified.

If you’re looking to buy a cheap new laptop, Chromebooks are a good choice. With some even costing less than $300, they’re a tempting option. Web-browser-based Chromebook laptops come in both laptops two in one designs, and they run on Google’s minimalist Chrome operating system for everyday tasks. Before making the jump from a Windows macOS operating system, it’s important for you to consider whether a Chromebook offers everything you need from a PC.

They were regularly ridiculed – and rightly so – for their limited functionality and dependence on a constant internet connection.

The operating system turned ten years old last year and Chromebooks are far from their start, but some things haven’t changed, and you may not want to work with the limitations that they do have. Also, if you don’t feel like reading this and just want to experience Chrome OS, here’s how to temporarily run it using an inexpensive USB flash drive you probably already have to lie arround.

What’s the difference between a Chromebook and a laptop?

There are many similarities between laptops and Chromebooks, but there are also many differences between them, some of which might be important to your buying decision. Here are three things to consider when choosing between these two types of computers.

How are laptops and Chromebooks similar?

Some of the points listed here are not specific to any particular system. Cloud storage and web applications are available for both laptops and desktops. Chromebooks have multiple USB ports and USB slots, but fewer than most laptops.

The main difference between Chromebooks and regular laptops will always be the operating system (Chrome OS) and how it affects operations. There are several categories where Chromebooks and laptops score roughly equally.

Over the years, laptop battery life has improved because designers have been able to add more and larger batteries without making them too bulky. Chromebooks have less space for big batteries but get a lot more out of them, thanks to their lightweight operating system.

All Chromebooks are made to be extremely thin and lightweight. Laptops come in a wide variety of sizes and weights, from tiny laptops to large laptops. You can easily find a Chromebook-sized laptop.

Laptops with strong frames and keyboards have long proven useful for military and industrial purposes. Chromebooks are catching on, with fewer moving parts and features like bumpers reinforced ports, and stronger corners to limit accidental drops.

And, as the Chrome OS continues to evolve, more PC-like features become available. Some Chromebooks now offer an optional Windows-style interface. Likewise, PC operating systems are in some ways becoming increasingly similar to Google Chrome. Windows 10 runs its core apps similarly to how the Chrome OS does. You can also download more apps from the Microsoft Store, just like you can from the Chrome Web Store or Google Play.

It depends on who you ask. How well a machine performs depends on its specifications, workload, and many other factors. If we put the exact same specifications into a Chromebook, a Windows computer, and a Macbook Pro, the Chromebook will always perform better than the others. Chrome OS is a lightweight operating system and doesn’t require much power to run smoothly.

Laptops are good for performing heavy duties like Video editing, photography, and Solidworks.

Other standard laptops are also gaining in this department, thanks in part to lower-powered processors and other improvements. That is the keyword: “catching up.” It’s tough to beat Chromebooks in battery life.

Most Chromebooks usually get at most eight hours of battery life. Those numbers are rare for Windows or macOS unless you pay up. If you go with power-thirsty gaming laptops, it’s almost impossible. You can always buy a battery pack that’s powerful enough to keep your laptop or Chromebook running for longer.

The best ultra-high capacity portable chargers up to 50,000mAh.

Are Chromebooks for casual users?

Chromebooks can be used for serious work. They’ve helped me edit professional photos and write an article for Android Authority. They’re not designed to perform certain tasks extensively, at most efficiently.

If most of what you do online can be done with a web browser, then Chromebooks will work wonderfully for you. These machines are fun for email checkers, Netflix bing­ers, social media buffs, web surfers, and anyone else who loves to play games. You can use Google Docs for documents, spreadsheets, and presentations. Google Drive can also use the cloud for its storage needs.

While Chromebooks have access to the Google Play Store and their broad range of apps, I don’t like relying too much on them. Most Android apps aren’t well designed for use on large computer screens. The UI may be a bit messy, but bugs are common. These Android apps work fine, but they’re not as polished as they could be.

If you decide to use Linux apps instead of Chrome OS apps, you’ll find that the number of available apps is not nearly as large. Windows and macOS still beat out Linux when it comes to this feature. While Windows operating systems are dedicated gaming laptops.